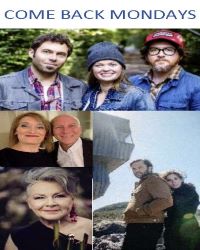 Aug 8th 8:00PM - Fortunate Ones Fortunate Ones is a contemporary folk duo from Newfoundland. Celebrated for their harmony-entwined songs of hope, resilience, and the human condition and their joyfully disarming live shows, they have toured relentlessly, bringing their open-hearted performances to thousands of people across North America and beyond. Catherine and Andrew have been busy since the release of their debut album The Bliss in 2015 – thousands of miles, hundreds of shows, award winning albums and scores of fans have all been hallmarks of the success the duo has experienced since their humble beginnings in St. John’s. The Bliss was nominated for a JUNO Award and landed two #1 singles on CBC Radio 2’s Top 20. On their sophomore album Hold Fast, the title track hit #1 on the CBC Music Top 20 Chart. The album also took home three Music NL Awards in 2018, was nominated for four East Coast Music Awards, and the 2019 Canadian Folk Music Award for Vocal Group of the Year. To date, songs from Hold Fast have over 16 million streams on Spotify. www.fortunateones.ca

Aug 15th - Petrina Bromley & Bill Brennan Newfoundland's Broadway star, Petrina Bromley is home from the smash hit Broadway musical, Come From Away, and what better way to spend the time than to join forces with renowned St. John’s musician and pianist Bill Brennan for an evening of favourite songs. Petrina and Bill will perform a mixed tape of Broadway, Pop, Country, and traditional music to make your toes tap and bring a smile to your face.

Aug 22nd - Come Home Year - A Staged Reading by Mary Walsh Part coming of age story, part murder mystery, it's about a young girl's hard fall from innocence to experience, and her all consuming quest to be a somebody in the eyes of her estranged family. It's the summer of 1966 and Newfoundland is celebrating it's first ever Come Home Year inviting the Newfoundland diaspora to come back to their ancestral beginnings, and from all over the world Newfoundlanders are coming home, and so is our heroine, Marietta. For reasons forever unknown to her, she had been sent to live with her two maiden aunts and an invalid uncle when she was just eight months old, separating her from her seven brothers and sisters and her mother and father for most of her life. But suddenly at age 13, as the result of a serious infraction, Marietta has been sent from the home she's always known, back too live with her parents and family, the people who'd never wanted her in the first place. All through that sad, sun-drenched summer of 1966, Marietta tries desperately to fit in, to belong somewhere, to be somebody, but the harder she tries the more she feels left out. She is almost invisible in a house alive with 25 people – a house bursting at the seams with pregnant sisters, Brooklyn cousins, New Jersey friends, Bay dollies, and gorgeous American fellas let loose on the world in red Impala convertibles, all determined to have the most fun summer of their lives celebrating Come Home Year – Marietta struggles to write herself into the narrative.

July 18th 8:00PM- The Once Newfoundland has a storied history of stunning songwriters, poets and players. Over the course of the last decade The Once have writ and knit themselves into that story with continuous Canadian and international touring, Canadian Folk Music Awards, East Coast Music Awards, JUNO Award nominations, and a dedication to songwriting.